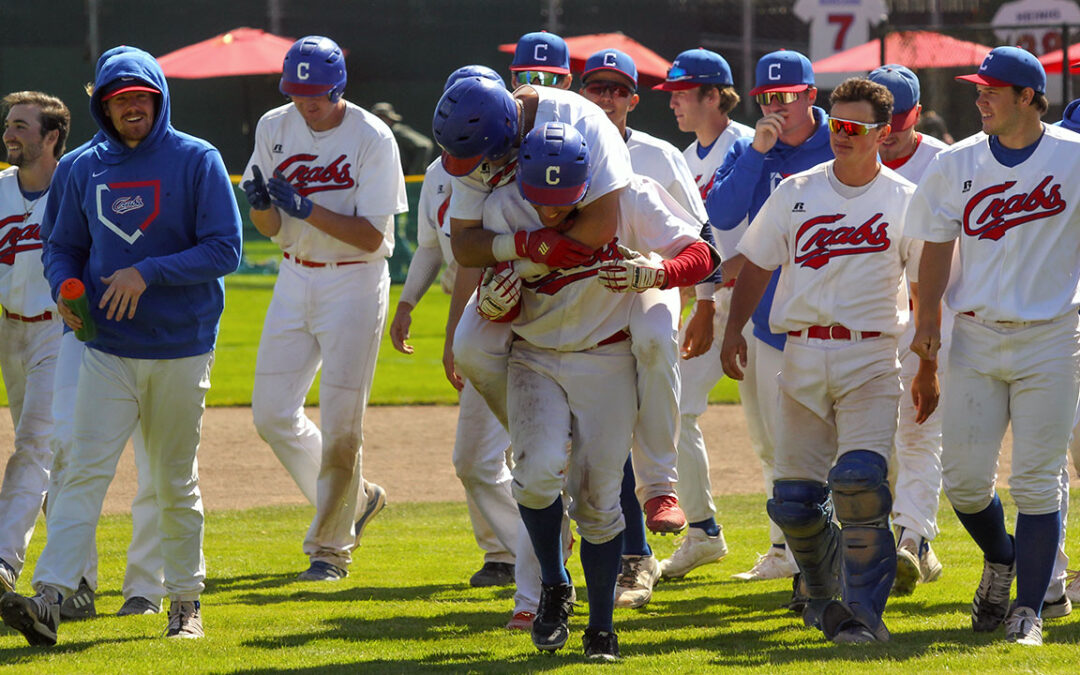 As the afternoon sun – and wind – wore on, zero after zero went up on the scoreboard at the Arcata Ball Park. After an early flurry that saw the Lincoln Potters take a 4-3 lead after two innings, the Crabs’ tying run in the sixth would be the only score until the bottom of the 13th, when Eureka’s Ethan Fischel drove in Ethan Smith for the game- and series-winning run. The speedy Smith had been hit by the first pitch of the inning, and two pitches later he stole second to put himself within range. The next two batters both lined out to shortstop, bringing up Fischel with two outs. He drove Garrett Leggitt’s second pitch into left-center, and was mobbed at first by his teammates as Smith breezed across the plate with the winning run.

“We won the series, that’s the goal of every one, and that’s huge, that sets the tone for what’s gonna be a really big summer,” said Crabs manager Robin Guiver. “It was good to see the ballpark back to life, and to have a new group of Crabs here is pretty sweet.”

The Potters had come in undefeated on the season, including a season-opening sweep of the Marysville Gold Sox, but the Crabs gutted out the series thanks to consistently strong pitching. All three starters, Cade Van Allen, Cole Tremain, and on Sunday Owen Stevenson, did their job, and the bullpen of Wesley Harper, Wil Springer, Manny Casillas and Sean Prozell was dominant on Saturday and Sunday, allowing just one run in 11 innings. “(In the first game) we were a little sloppy defensively, Wesley Harper kind of took the brunt of it on Friday, but he pitched well,” said Guiver. “He had to get six out in one inning, and came back today and shoved, and Prozell threw well yesterday and today, Harper threw Friday and today, Springer threw Friday and today, it’s awesome, the guys really stepped up for us.” Tuesday and Wednesday the Crabs welcome the Bay Area Force to town. Both games start at 7 p.m. Tickets available online.