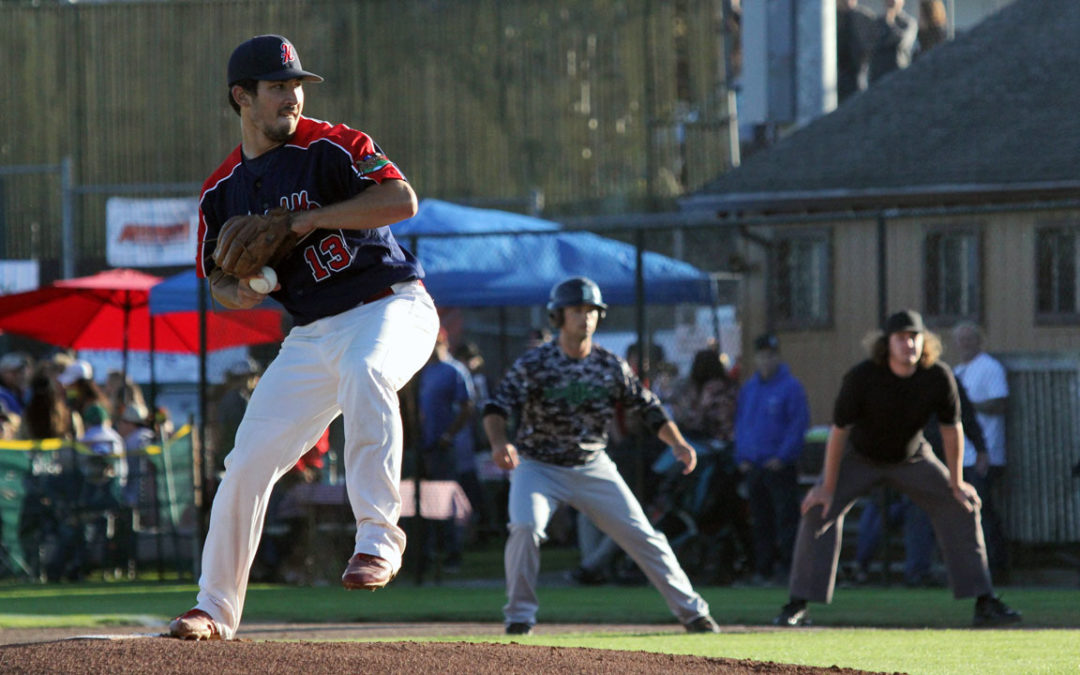 Ed Note: This story originally appeared in the Times-Standard. It is reprinted with permission.

Summer baseball is right around the corner and the oldest, continuously-operated summer collegiate wood-bat team in the nation is keen on doing everything in its power to play its 76th season in a row.

The Humboldt Crabs will tentatively start the season May 29 at home against the Corvallis Knights, provided the worst of the coronavirus pandemic has passed. An outbreak of COVID-19 in the US recently forced the NCAA and the CCCAA to cancel all spring athletics and is currently responsible for the indefinite closure of all school and college campuses in the state, and the subsequent suspension of all high school spring athletics.

“The hope is that we’ll play a full season,” Sharp said. “But if we have to play a shortened season, that’s what we’ll do. At the end of the day, it’s our responsibility to provide our fans with a safe atmosphere to watch games, so we have to be realistic even if that means playing a shortened season or having no season at all. The bottom line is that we are doing everything possible to get on the field this season.”

Ultimately, decisions to push back the start of the season or call it off all together fall on the Crabs’ board of directors.

“I don’t think I’ve felt the level of excitement before that I have been getting from these guys over the past few weeks,” Guiver said. “With their seasons having been canceled, these guys are fired up and ready to go. Whereas usually we would jump right into the summer season with no real break for these guys, now we’ll be getting on the field after two to three months of down time where they haven’t been able to practice much, and that’s something everyone is going to deal with so it’ll be interesting to see how that plays out.”

The NCAA as well as the CCCAA each announced recently that athletes who’s spring seasons were canceled due to COVID-19 will be allowed to recoup a year of eligibility.

And that means one fan-favorite in particular will get to spend a third summer with the Crabs.

Former Fortuna Husky turned CSU Monterey Bay Otter Kokko Figueiredo will return to the Crabs for a third season. Figueiredo led the Crabs with 64 hits in 2019 and had the third-most RBIs (28) and the third-highest batting average (.364) for the club.

Ethan Fischel, a former Eureka High player who spent 2019 on the Humboldt B52s, will also return to the Crabs, as will local standout Dylan Campbell who as a pitcher had the third-lowest ERA (1.714) on the Crabs last season.

Other notables returning from the 2019 club include Bryce Kirk, who hit nine home runs and eight doubles last season and Dalton Smith, a reliever who appeared in 16 games in 2019. Jackson O’Boy, a 2018 fan-favorite, will return to the Arcata Ball Park in 2020 after spending 2019 away from the crabbies.

The Crabs have five scheduled games against the Humboldt B52s in 2020, three at home and two at Bomber Field.

“The B52s have done a great job over the years establishing themselves and its always fun getting on the field with them,” Guiver said.

B52s’ owner and captain Jeff Giacomini said his club, which plans to open the season May 30, will hold out as long as it can.

“We’re still all in,” Giacomini said. “We’re going to hang on until we have to let go.”

Giacomini said the cancellation of college baseball has made summer ball as hot an option as he’s ever seen it.

“It’s been a great year for recruiting,” Giacomini said. “Guys won’t get to play this spring so they aren’t going to take the summer off. As as recruiting goes, this is the best I’ve ever seen it.”

The Crabs will, for the second year in a row, host the Humboldt Eagles 19-U American Legion team. That game will be played on June 23.

Eagles’ head coach Matt Tomlin, who played along side Guiver on the Crabs years ago, said the opportunity for his young players to step on the field with the Crabs is a “dream come true.

“That game last summer was a great night for Humboldt County,” Tomlin said. “A lot of kids had their dreams come true in getting to step on the field with the Crabs, which are to a lot of kids from this area the closest thing to a major league team that they see growing up. It’s a great opportunity to showcase all the local talent we have on a great stage in front of Humboldt County.”

Tomlin said the 2020 Eagles have the potential to be the best team in the program’s history. The pitching is certainly to that level as the club will feature all-county arms and collegiate cannons in Merick Sears, Caleb Ruiz, Nick Dugan, Cameron Saso, Brady Munson, CJ Van Meter, Landon Gomes and half-a-dozen other aces.

“Our pitching staff goes 10 deep, we are loaded with talent this year,” Tomlin said. The Eagles, as of now, are still set to begin the season in June.

As has become the norm, the Crabs will play a handful of games against the home team’s favorite club to heckle, the Pacific Union Financial Capitalists. Also on the 2020 schedule are the Lincoln Potters, the Seattle Studs and the Yuba-Sutter Gold Sox.

Much of the Crabs’ season will be determined by what other clubs do in response to the coronavirus and where the state and nation stand in a few months’ time.