MVP! MVP! And Other Awards 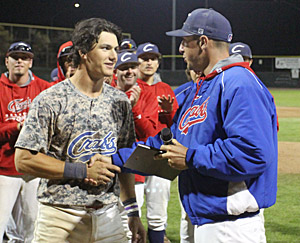 After the conclusion of the second annual Humboldt Invitational Tournament, Fisher announce the winners of the team’s annual postseason awards. Taking the top honor of Most Valuable Player was James Outman, who earn the title by being the most consistent offensive producer from day one through the end of the season.

“(Outman) kept himself in the lineup each and every day, he never gave away at-bats,” said manager Tyson Fisher. “He consistently was up there grinding, making pitchers work.”

The numbers back up the statement. Outman led the team with a .372 batting average and team highs in hits (70) and RBIs (39) while starting almost every game – something else Fisher said made the decision easy.

“There was never a fear of if he was ready to go or not that day,” Fisher said. “I always hate it when coaches ask, ‘Hey, are you ready to go?’ You’re a player, you’re supposed to be ready to go. He truly goes about each day like that.”

The Pitcher of the Year award went to Aaron Herr, the intense, hard-throwing righty who took the mound every Saturday. He led the team with 7 wins and posted a 1.45 ERA.

“Herr threw some really good games for us, in some big spots,” Fisher said of his ace.

The Morsching/Heinig Memorial Coaches Award, given to one or more players who exhibit the dedication, perseverance and teamwork associated with the award’s namesakes, was shared by first baseman Jayson Newman and pitcher Reed Pfannenstein, each of whom brought it every day in their own unique ways.

“Newman and Reed, they both work hard, they go about it differently,” said Fisher. “Newman’s more of a visible worker. I think Reed’s kind of a behind-the-scenes guy…he’s in there just trying to provide comic relief for his teammates, and I really enjoyed having both of them out here.”