What Are: The Humboldt Crabs? 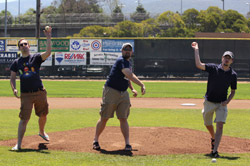 Here on the North Coast, it's no secret that the Crabs experience is pretty fantastic (if we do say so ourselves — and we do), but it's always a bit of a thrill when we get some exposure beyond the Redwood Curtain.

Well on Jeopardy on Tuesday, Feb. 16, a Contestant named Zach Binney told host Alex Trebek that he and his friends travel the country during the summer in search of baseball fun, and that in all his travels, the very best experience he's had was right here in our little ballpark!

Well folks, it's official. The Crabs are the best. #jeopardy #GoCrabsGo #LifeAsACrab

As it turns out, Binney and two friends write a blog called "Scrappy Journeymen With Heart Who Blog the Right Way," and on Sunday, July 6, 2014, the trio visited Humboldt and took in a game. They threw out the first pitch(es), had themselves a generally good time, and then wrote about it. You can read the whole thing here, but below are a couple of highlights.

"At high noon, we heard a jarring emergency siren, but no one around seemed to notice.  We learned that it signals fire and tsunami warnings and has to be tested once a day, always at noon.  At Crabs games, though, it has unofficial status as the moment it’s legal to buy beer.  We think all cities should have beer alarms."

"The announcer booth was the Don Terbush Announcer Booth 1949-1994.  45 years calling games in Arcata, CA is an achievement any of us would be proud to have on our resume."

"Examples of (the band's) shenanigans included “Ole” for mound meetings, “Na-na-na-na BAT BOY” for the batboy, Sportscenter theme after a great double play, Chicken Dance during an intentional walk, Wild Thing after two non-intentional walks, frequent requests for a Freeway Ball, and numerous others.  The director even seemed to have a whiteboard that listed specific songs for specific game situations.  Due to their presence and enthusiasm, we didn’t hear a minute of canned music for the entire duration of the game."

And finally, their conclusion and score:

Conclusion:  68.5 on our completely arbitrary scale.  It’s slightly inflated due to the first pitch, but this was a really fun game regardless.  The crowd and band really make the experience and push it on par with San Rafael.  The Pacifics may have a slight edge in creativity, but the Humboldt area clearly takes a lot of pride in this team and it’s infectious as all hell.  9.5/10