During the summer of 1982, Kerwin Danley had every intention of making it to “The Show”. It was a summer spent on the North Coast sporting a Humboldt Crabs jersey and with his collegiate career at San Diego State rolling — he slashed an impressive .399 batting average in 1983 — the Los Angeles native had eyes set on Major League Baseball.

Fast forward today and the former Crabs’ outfielder, without question, made a resounding impact in the majors — as an umpire.

Danley became the first African American crew chief in the league this past February.

“I’m on top of the world,” told MLB Network after his promotion. “I’m humbled, I’m honored and I’m glad to be carrying on the legacy of the African-American umpires who came before me. I’m just loving it right now.”

“I always wanted a chance to play in the Major Leagues,” Danley continued. “Being an All-American and not getting that chance was hard, but once I got into umpiring a few years down the road, I just realized that things are meant to be. Everybody’s where they’re supposed to be, and I think that was just my lane. I took to it, and I still enjoy it to this day. It’s been a great career for me. I don’t have any regrets.”

John Klar, a Eureka native and outfielder like Danley with the Crabbies, got to spend time with the now MLB crew chief outside the diamond.

“We took a tennis class at College of the Redwoods,” Klar said over the phone. “He was a great teammate and I enjoyed our time a lot. He was a quiet guy who went about his work.”

“How many people you know have made it to the big leagues?” Klar added. “Kerwin was a baseball guy and I’m not surprised to see him on TV.”

Ferndale native Mike Spini recalls the initial meeting between he and Danley.

“I first met Kerwin at the Pitch Hit and Throw competition in San Francisco in the early 70s. He was the So. Cal champ and I was the No. Cal champ,” Spini wrote on the Humboldt Crabs Facebook page. “We were in the same group and he beat me pretty good that day. 10 years later we ended up on the same Crabs team (1982). We were loaded with talent. Ned and Lou knew how to recruit that’s for sure. Kerwin was a class act and I always knew that if he didn’t make it to the “Show” he would be successful in anything he attempted. Little did we know he would make it to the “Show” as an umpire. And not just any umpire but now Crew Chief.”

“I remember my mom used to have the team over for dinner and she would cook Italian food for them,” the post continued. “One night she made Polenta with a meat sauce but Kerwin was a vegetarian so he just ate the polenta without the sauce and he just couldn’t get enough of it. He always talked about my mom’s cooking. That’s what I remember about Kerwin and our playing days. Great teammate!”

According to Danley, his odyssey into officiating began in 1985.

“All I know about umpires is they yell at umpires and I don’t want to do that,” Danley recalled. “I finally thought about it, I went to umpire school two days before it started in 1985 and I’ve been doing it ever since. That’s how I got into it — just luck.”

Through it all, Danley has been part of historic moments in baseball (he was the first base ump when Barry Bonds tied Hank Aaron 755th career home runs mark), displayed his calm and stern approach (he ejected Eureka-born Royals manager Ned Yost), and showed remarkable toughness (he’s been hit by foul tips and errant pitches). 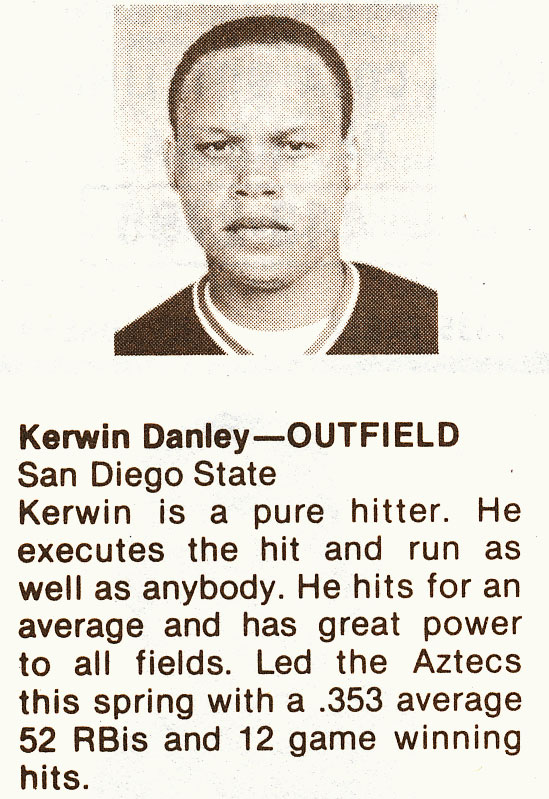